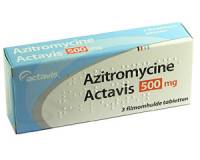 Azithromycin is an antibiotic drug commonly used to combat a wide range of bacterial infections. These include ear, skin and respiratory infections as well as several different types of sexually transmitted diseases. To find out more about this effective and widely used antibiotic drug, continue reading this article.

Azithromycin is an antibiotic drug commonly used to combat a wide range of bacterial infections. These include ear, skin and respiratory infections as well as several different types of sexually transmitted diseases. To find out more about this effective and widely used antibiotic drug, continue reading this article.

When is Azithromycin used?

Azithromycin is an antibiotic of the macrolide type, which also includes Clarithromycin and Roxithromycin, which as well as being used for treating the above conditions are also effective against atypical mycobacterial diseases. It should be noted that these antibiotics are not effective against viral infections such as ‘flu and the common cold. Misuse of them may in fact lead to decreased effectiveness.

How to use Azithromycin

Azithromycin is a prescription drug that should be taken in accordance with instructions. All directions on the enclosed leaflet should also be adhered to. The drug is taken orally, usually once a day with or without food. If you experience any stomach upsets, taking it with food may relieve these symptoms. The final dosage will be arrived at by response to treatment and the particular medical condition which is being addressed.

A peculiarity of antibiotics in general is that they are most effective when their concentration in the body is kept at a fairly constant level. This is why Azithromycin should be taken at the same time each day, rather than sporadically. You will need to continue taking the drug until the amount you have completed the course, even if your symptoms disappear within a few days.

f you stop taking the medicine before completion of the prescribed course, the bacteria causing the problem may be able to continue their growth and cause a return of the infection.

Tablets should be taken with plenty of water. Usual dosage is 500mg orally as a single dose on the first day, followed by 250mg orally once a day for the remainder of the course.

Users may sometimes experience side effects when taking Azithromycin.
These can include:

A severe skin reaction can also occur in rare cases, and if this spreads to other parts of the body can be fatal. Any occurrence of ‘flu-like symptoms, swollen glands, fever or tingling sensations should be reported to the doctor as soon as possible. Liver-related problems may also occur, indicated by symptoms such as jaundice, clay-coloured excreta or dark urine.

Azithromycin should not be taken by anyone who has ever suffered in the past from liver problems or jaundice. The rarer severe skin reactions are heralded by symptoms such as a sore throat and facial swellings, with a burning sensation in the eyes and a purple, swelling rash accompanied by peeling and blistering.

If you have diarrhoea that contains blood you should report this to your doctor immediately rather than taking an anti-diarrhoea medicine, which could adversely react with the Azithromycin.

The absorption of Azithromycin can be adversely affected by antacids that contain magnesium or aluminium if these are taken at the same time. These include products such as Milk of Magnesia, Rulox, Mintox, Gaviscon and a number of others. If you do take such medication, wait for at least two hours before taking the Azithromycin.

Always inform your doctor fully about any medication you are currently taking, including those you have recently stopped using, before embarking on a course of Azithromycin treatment. Several drugs may react with Azithromycin, and you should be especially wary of Nelfinavir, as well as commonly used blood thinners such as Jantoven, Coumadin and Warfarin.

Use during pregnancy, while driving and with alcohol

On tests of pregnant women, Azithromycin was found to be better tolerated than closely related drugs such as Erithromycin, and there were no adverse foetal effects reported. Animal studies have also been carried out, and these showed no evidence of toxicity in the foetus. The evidence is less clear-cut in relation to breastfeeding, as it is still not clear whether Azithromycin is passed into breast milk or whether it can cause harm to a nursing baby. If you are breastfeeding, seek your doctor’s advice if you are worried about this. The consensus of medical opinion is that Azithromycin is a drug that should only be administered to pregnant women when there is a clear benefit that outweighs the risk.

As Azithromycin can cause drowsiness it is better not to drive while taking it.

As it may in rare cases cause liver damage, it is also best not to combine it with alcohol.