We’re launching our new website soon! But rest assured, we’ll continue providing you with the products and services that you have come to expect from Dokteronline.com. 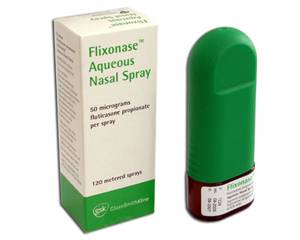 Flixonase is an aqueous steroid liquid nasal spray that is used to relieve the symptoms of allergies, hayfever and inflammation of the nasal passages. Allergies and hayfever are also known as rhinitis. It can also be used to help treat nasal polyps (when the lining of the nose swells) by reducing their size. This medication contains the active ingredient fluticasone propionate. It is suitable for adults and children from 4 years of age.

Flixonase is a prescription-only nasal spray that can reduce the irritation to the nose caused by allergies (perennial allergic rhinitis) and hayfever (seasonal allergic rhinitis). The symptoms of these conditions can be very unpleasant and include:

This medication is used to both treat and prevent the above symptoms in sufferers who are prone to allergies and nasal irritation. As well as relieving the nasal symptoms Flixonase can also help calm eye irritations that are linked to allergies, such as runny, itchy eyes. This medication contains 50 micrograms of fluticasone propionate per spray.

Flixonase belongs to the corticosteroids (also known as steroids) group which are anti-inflammatory medicines that suppress the immune system and reduce inflammation.  Corticosteroids are a manufactured version of the hormones that the adrenal glands produce. These glands are located just above the kidneys in the body and they produce hormones that are essential for life. This medication does not usually work immediately but takes some time to build its effectiveness. Therefore, it is important to use the spray as prescribed by your doctor (usually once a day). It is essential to read the package leaflet as there are some instances when corticosteroids cannot be used. If you have any doubts about taking this medication you should talk to your doctor.

Flixonase is used to treat and prevent inflammation in the nose lining caused by allergies and hayfever. It can also be used to treat nasal polyps. The nasal lining cells absorb Flixonase when it is sprayed into the nose. Flixonase prevents the cells from releasing chemicals that can cause an allergic reaction. Allergies occur when the body reacts to a certain substance or environment. Allergies typically cause a runny nose, watery eyes, itching and sneezing. Usually, the body’s immune system protects it against reactions to normal substances. The common things that can cause an allergic reaction and nasal irritation are:

There are also seasonal allergies, such as hayfever, which can range from mild with a few sneezes to extremely severe when a person cannot leave the house due to their reaction to the pollen in the air.

Hayfever is not actually a reaction to hay and does not produce a fever. It is a reaction to certain pollens in the air from trees, grass and weeds. There are some plants and trees that are more likely to trigger hayfever than others, for example, oak trees, olive trees and ragweed.

Nasal polyps are soft lumps inside the nose which cause no pain but can grow and block the nose. They can block the sinuses and cause sinusitis (an infection that causes the sinuses to swell). If a steroid nasal spray does not help with the symptoms then a doctor may suggest the nasal polyps are removed.

Flixonse should not be used to treat the symptoms of the common cold such as sneezing and a runny nose. It will not be effective as a cold is a virus, rather than an infection.

How do you use Flixonase?

Flixonase is sprayed gently into the nose at the same time each day.  Before using blow your nose. You should also shake the spray to ensure it works correctly. This is particularly important with a new bottle of Flixonase. You put the spray into one nostril and close the other with your finger. The spray should be aimed toward the outside of the nose (internally), rather than directly at the nasal septum. This reduces the likelihood of getting a nosebleed when using this medication. Tilt your head forward a little when doing this.  As the spray is released you should breathe deeply to inhale the medication.

Next, remove the Flixonase bottle from your nostril and breathe out slowly through your mouth. Ensure that you clean the nozzle after using the spray, by wiping it with a clean tissue. The spray should also be thoroughly cleaned once a week for hygiene reasons. Remove the top and soak it in warm water for a while then rinse it under cold water and allow to air dry. Flixonase may not work immediately and it usually takes a few days before you start to see results. If there is no improvement after a week then you should consult your doctor. It is a good idea to use Flixonase if you know you are likely to be in a situation where an allergic reaction may occur, such as when the pollen season is about to start, if the pollen forecast is high or if visiting somewhere that has animals (it is usually dogs and cats that cause an allergic reaction).

You do not need to administer Flixonase with food or drink.

Children under 4 years of age should not use Flixonase.

Try and use this medication at the same time every day so you don´t forget to take it and to allow it to perform to its maximum effect. This also ensures your body receives the right balance of the medication. When using Flixonase be careful not to let it enter the eyes or mouth. It should only be used as a nasal spray.

Do not share your Flixonase with anyone else, even if they have the same symptoms as you. This is because of the risk of the spread of infection and also because this medication must be prescribed by a doctor.

For adults and children over 12 years of age, the usual starting dose for Flixonase is 2 sprays twice a day into each nostril. It is best to use your medication at the same time every day. Once your allergy symptoms start to disappear or reduce, your doctor will probably recommend that you reduce the dose to 1 spray per day into each nostril.  You should not use Flixonase more than has been prescribed by your doctor, for example using it several times during the day to relieve the symptoms of allergies is not recommended.

For children aged between 4-12 years of age, the usual dose is 1 spray into each nostril once a day at the same time. Only on a doctor’s recommendation and if the symptoms are particularly bad should the dose be increased to 2 sprays per day, and this should be for the shortest time possible. If you forget a dose you should take the missed dose as soon as you remember unless it is near to the time when the next one is due. If this is the case then only take the next dose at the usual time, do not administer a double dose.

It is important to use this medication exactly as advised by your doctor.

What are the side effects of Flixonase?

As with all medicines, there is the possibility of side effects when using Flixonase. These can include:

You may find you sneeze immediately after using Flixonase. This is common and nothing to be concerned about. The sneezing will gradually stop.

When shouldn’t you use Flixonase?

Does Flixonase interact with other medication?

You should inform your doctor of any other medicines you are taking, including herbal medicines, before you start taking Flixonase. If you have recently been taking or are still taking any other medication containing corticosteroids such as tablets, injections, drops, creams, other nasal sprays or you use an asthma inhaler it is especially important to tell your doctor. This is because using more than one steroid at a time can increase the risk of side effects.

Where can you buy Flixonase?

Flixonase can only be prescribed by a doctor. You cannot buy it over the counter in a pharmacy.

Can  I get Flixonase without a prescription?

No, you cannot get Flixonase without a prescription.