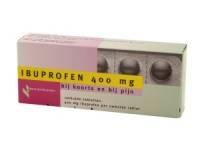 Ibuprofen without prescription (OTC) is an NSAID (Non-Steroidal Anti-Inflammatory Drug), a class of pain relievers that also reduces inflammation. NDAIDs reduce pain and fever and, in addition, suppress inflammatory responses such as swelling and redness of the skin.

What is Ibuprofen OTC?

Ibuprofen without prescription (OTC) is an NSAID (Non-Steroidal Anti-Inflammatory Drug), a class of pain relievers that also reduces inflammation. NDAIDs reduce pain and fever and, in addition, suppress inflammatory responses such as swelling and redness of the skin.

What is it used for?

Ibuprofen eases pain and reduces inflammation. It is prescribed to treat various conditions, including:

How to use ibuprofen

Ibuprofen tablets should be swallowed whole with plenty of liquid. This medicine is most effective when taken on an empty stomach. If you have a sensitive stomach, it is best to take it with or after meals to avoid stomach distress. Ibuprofen in low doses (200 mg and 400 mg) is sold over the counter. Stronger doses (600 mg) require a prescription, which is provided after an online consultation.

Unless otherwise prescribed by your doctor, the general recommended dose for adults and children aged 12 and above is:

The maximum amount of ibuprofen for adults is 1200 mg per day (three or four maximum doses).

Ibuprofen generally has few side effects, but in rare cases it has been known to cause:

See package leaflet for a complete list of side effects.

When not to use ibuprofen

Ibuprofen is not suitable for everyone. You should not use ibuprofen if:

Ibuprofen interacts with other medicines, including blood pressure reducers and anticoagulants. The doctor will have a list of medicines that you should avoid mixing it with. Make sure to mention what other medicines you are taking during the online consultation. See package leaflet for more information about contraindications.

It is not advisable to take ibuprofen if you are pregnant. You should in any case avoid taking it during the last three months of pregnancy. With your doctor’s approval, ibuprofen can be used while breastfeeding. Ibuprofen may cause dizziness. Stay out of traffic if you experience this side effect. Mixing alcohol and ibuprofen may cause or worsen stomach problems. It is therefore advisable to reduce or stop alcohol consumption while taking this painkiller.