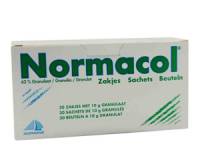 Normacol is a natural treatment for constipation that encourages regular bowel movements. It is for occasional use for people who suffer from the uncomfortable symptoms of constipation. It can be taken by adults and children over six years of age.

Normacol is a natural medication that treats constipation (difficulty going to the toilet for a bowel movement). Normacol is known as a bulk-forming laxative and comes in the form of fibrous granules that absorb fluid in the intestines. This causes the waste to weigh more and “bulk up”, which stimulates the bowel muscle to work, resulting in a bowel movement. This procedure can take two-to-three days to work.

There are two forms of Normacol:

Normacol is used for the relief of constipation. It is a natural product that contains the active ingredient sterculia, which is a natural dietary fibre that is extracted from the sterculia urens plant (part of the mallow family) as a gum. The raw gum is known as gum karaya and is dried and processed to remove any impurities. This turns it into the granules that are used in Normacol. In addition to treating constipation, Normacol can also be used for people who have had a colostomy or anal or rectal surgery, those who need to follow a diet that is high in fibre, and have swallowed a sharp object, so that possible damage to the intestine is reduced.

This product is an alternative to increasing the amount of fibre in the diet which can relieve constipation without medication. It works by bulking the stools which can prompt a bowel movement.

Constipation is a common health problem that occurs when bowel movements are infrequent (less than three times a week) and are difficult and painful. It can happen to people of all ages and is often the result of a poor diet. Symptoms of constipation are:

Many people suffer from occasional constipation, which can be treated with a product such as Normacol. If you experience constipation regularly, you should make an appointment to see your doctor who will investigate the cause. Constipation can have several causes, such as:

Constipation is also common in pregnancy due to:

It can also occur for some time after giving birth. If you wish to take Normacol while pregnant to relieve constipation, you should first ask the advice of your doctor. This also applies to taking Normacol while breastfeeding. Haemorrhoids (piles) are a common result of constipation and can be very painful and uncomfortable. Some of the reasons they can occur are due to straining during bowel movements and pregnancy.

Normacol should not be used long-term to treat constipation as it can affect the gastrocolic reflex. This is the natural bodily reaction to food entering the stomach and causes the urge to perform a bowel movement. This medication should only be taken for a maximum of four days at a time. If you do not see an improvement in your condition after four days, stop taking Normacol and make an appointment to see your doctor. It is important to have regular bowel movements without the urge to strain to maintain a healthy digestive system. Going to the toilet regularly (once or twice a day) expels toxins and bacteria and stops them from remaining in the body. It is essential to get rid of this waste as the body does not need it.

How do you use Normacol?

Normacol is easy to use as it comes as a sachet of granules or a pack of individual granules that you either tip directly onto your tongue (sachet) or put into your mouth with a spoon (pack).

If you do not want to take all the granules at once, you can take a few at a time. Swallow the granules whole with a large drink of water or a soft drink. Do not chew them or crush them.

It is important to drink a minimum of two litres (eight-to-ten cups) of water or fluid each day when you are taking Normacol to ensure the granules get to the stomach. Otherwise, they may not travel to where they should and could cause a blockage in the intestine or food pipe. Do not try to dissolve Normacol granules in water – they must be taken as directed above. It is advisable to eat a high-fibre diet when you are taking Normacol to increase its effectiveness. If you do not usually eat a lot of fibre, you should introduce it into your diet gradually. Exercise will also help as this can keep your digestive system healthy by encouraging regular bowel movements. If you forget to take a dose of Normacol, you should wait until the next dose and then take it as normal. Do not take a double dose as this could be harmful.

This medicine should not be taken if you are lying down or before going to bed, to prevent intestinal obstruction. This is particularly important for elderly people. If your symptoms do not improve after four days or worsen, you should see a doctor.

The usual dosage of Normacol is:

Normacol comes in packs as well as granules and in this case, the equivalent of a sachet should be taken (a heaped teaspoon). Normacol can also be sprinkled onto food that does not require chewing, such as yogurt or soup. You should still drink something after taking Normacol in this way to ensure it passes through the intestines. Normacol should be taken after eating, which will help it work correctly. This medicine should only be used for a maximum of four days.

What are the side effects of Normacol?

The possible side effects of Normacol are:

If you suffer from any of the above side effects that continue after four days of taking Normacol or Normacol Plus, you should see a doctor.

When should you not use Normacol?

You should not use Normacol or Normacol Plus if you:

Does Normacol interact with other medications?

Normacol is not known to interact with other medications. However, it is important to inform your doctor of any medicines you are taking, including herbal medicines, before taking Normacol.

Where can you buy Normacol?

You do not need a prescription for Normacol granules or Normacol sachets, you can buy them over-the-counter at a pharmacy.

Can I get Normacol without a prescription?

Yes, you do not need a prescription for Normacol granules or Normacol sachets.