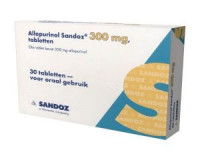 What is allopurinol used for?

Allopurinol is prescribed in the treatment of gout and kidney stones. These conditions are caused by a build-up of uric acid.

Gout Uric acid crystals can build up in the joints and cause inflammation. Although gout attacks can occur in any joint in the body, the disease has a preference for the big toe – it swells, turns red and becomes sore and throbbing. In some cases, the crystals also collect outside the joints and may be seen under the skin, where they form lumps called tophi. Gout attacks usually subside after two to three weeks.

If you have had more than two gout attacks in 12 months, then it may be helpful to take allopurinol. Allopurinol is used to lower levels of uric acid in the body. By lowering the production of uric acid, flare-ups of gout can be prevented.

Urine has various wastes dissolved in it. When there is too much waste in too little liquid, crystals begin to form in the kidneys. If the kidney stone travels down the ureter it may get stuck. The pain that this causes is usually concentrated in the side and back. The attacks can be so painful that they can be accompanied by nausea and vomiting. When the stone leaves the body in the urine (usually within a few days) this, too, can be very painful.

How to use allopurinol

The active ingredient allopurinol is available in tablet form. The tablets should be swallowed whole with some water, preferably with or just after meals to avoid side effects such as nausea. It’s important to drink plenty of fluids during the day (at least two to three litres a day) while you are taking allopurinol. This will cause the body to produce more urine and secrete more uric acid.

Allopurinol may take some time (a number of weeks or months) to take effect. Keep taking it daily even if your symptoms do not seem to be improving. If this medicine has the desired effect, you will probably need to take it long term.

Length of treatment and daily dose must be determined by a doctor. Unless otherwise prescribed, the usual dose is:

Consult a doctor if this dose does not produce the desired effect. Medicines with allopurinol are rarely prescribed for children. When used in children, the dosing regimen must be determined by a doctor.

Like all medicines, allopurinol may cause side effects, although most people do not experience any. The most commonly reported side effects include:

When not to use allopurinol

In some cases, allopurinol should be used with extreme caution. People with kidney or liver problems or people who use certain medicines might need extra monitoring. It is therefore important to consult a doctor before using allopurinol. See the package leaflet for more information.

Do not use allopurinol if you are pregnant or breastfeeding, unless otherwise advised by a doctor. Use of this medicine especially in the first three months of pregnancy is strongly discouraged as it may have harmful effects for the developing baby.

The active ingredient allopurinol does not affect your ability to drive.

Alcohol can cause increased uric acid levels in the blood and this may trigger or worsen the side effects. It is therefore advisable to reduce or stop drinking alcohol altogether while you are being treated for kidney stones or gout.