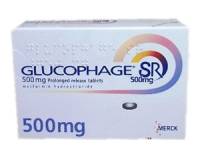 Glucophage is a slow-release medicine used to treat type 2 diabetes. It is part of the biguanide group of medicines which prevent the liver from producing glucose. Usually, the body holds the correct amount of glucose it needs, as the pancreas makes insulin which regulates the glucose. The pancreas constantly monitors glucose levels in the blood, and if levels rise, the pancreas releases insulin into the blood to counteract this. However, if a person has type 2 diabetes, their body cannot correctly process the amount of insulin it produces naturally, and too little is produced. There is also a linked condition known as insulin resistance, when the body does not respond to insulin correctly.

Type 2 diabetes can affect the body in two ways:

There is a risk of developing type 2 diabetes if you:

This disease can take several years to present and many people do not realise they have it. Type 2 diabetes is a condition that can be managed with Glucophage, a healthy diet, not eating sugary or processed foods, and regular exercise. Once you have been diagnosed with type 2 diabetes, you are likely to have the condition for the rest of your life, but it can be managed effectively.

Sometimes Glucophage is also used to treat polycystic ovarian syndrome (PCOS), which affects the performance of the ovaries. When women have PCOS, they often have high levels of insulin and the body can become resistant to it. Glucophage can therefore be used to reduce their insulin levels.

When is Glucophage used?

Glucophage is used to treat type 2 diabetes by controlling blood sugar levels. It reduces the amount of sugar the liver releases into the blood and helps the body manage its insulin levels. Insulin ensures the body has the right sugar levels in the blood. Sometimes the onset of type 2 diabetes can be prevented by eating a healthy diet and doing plenty of exercise. This is especially important for people who know they are at risk of developing type 2 diabetes, commonly for genetic reasons or because they are overweight. However, if healthy eating and exercise are not a sufficient treatment plan, then Glucophage can help treat type 2 diabetes.

It is important to follow the advice of a doctor for a total treatment process if you are diagnosed with type 2 diabetes. Glucophage is usually given to adults with type 2 diabetes, but in some cases, it can be prescribed to children aged 10 or over.

How do you use Glucophage?

You take Glucophage metformin tablets orally with plenty of water, with or after food to help prevent the occurrence of stomach problems as your body adjusts to the medicine. You should not chew the metformin tablets but instead swallow them whole. The usual starting dose is 500 mg as there may be side effects such as an upset stomach to begin with. After taking the initial dose for two weeks, you should have another blood sugar test to see how your body has reacted to the Glucophage. Your doctor should then decide if the dose needs to be increased. If this is the case the dose may be increased slowly over a period of time to allow your body to get used to the medication. It is possible your doctor may prescribe Glucophage in conjunction with another antidiabetic medicine, depending on your individual circumstances.

There are different strengths and dosages of Glucophage metformin tablets and you should only take the dose as prescribed by your doctor which will depend on your blood sugar levels. They may recommend you take the metformin tablets once, twice or three times a day. The Glucophage metformin tablets are available in 500 mg, 750 mg and 1000 mg and are prolonged release. This means that the ingredients are released into the body over a period of time. They work slowly and deliver the dose steadily, rather than the whole dose immediately on taking the tablet. The maximum dose per day is 2000 mg.

What are the side effects of Glucophage?

As with all medicines, Glucophage can have side effects although not everyone will experience them. These possible side effects can include:

These side effects are more likely to occur on first taking Glucophage and should gradually improve over a period of time. Getting the body used to Glucophage by starting on a low dose and slowly increasing it can help deter side effects, as can ensuring that you take this medication with or straight after meals.

When taking Glucophage, you should be aware of a condition known as lactic acidosis. This produces a sensation of burning in the muscles which is caused due to too much acid being present in the blood. This condition is also common after excessive exercise. It occurs because there is not enough oxygen in the body to break down the glucose, and so lactic acid is produced which causes pain.

Symptoms of lactic acidosis include:

When should you not use Glucophage?

Glucophage may not be suitable for everyone. You should not take it if you:

If you wish to get pregnant or are already pregnant and are prescribed Glucophage, you should talk to your doctor before commencing the treatment. This is because diabetes in pregnant women is often controlled using insulin as it gives more stable control of the blood sugar levels. It is also possible to combine Glucophage and insulin for pregnant women with type 2 diabetes. Your doctor will decide what is best for your individual situation.

Occasionally diabetes can occur during pregnancy, which is known as gestational diabetes. This is because all pregnant women develop a resistance to insulin while they are pregnant which stops after giving birth. This may be treated with Glucophage and/or insulin. You should speak to your doctor before taking Glucophage if you plan to breastfeed your baby. Glucophage should not be given to children under 10 years of age.

Does Glucophage interact with other medication?

You should also talk to your doctor if you are taking the contraceptive pill in conjunction with Glucophage, as contraceptives can change your body’s reaction to glucose.

Where can you buy Glucophage?

You can only obtain Glucophage metformin tablets with a prescription from a doctor.

Can I get Glucophage without a prescription?

No, Glucophage is not an over-the-counter medicine, you must have a prescription for it.