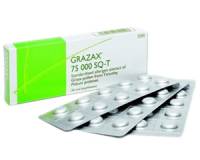 Grazax is a tablet-based treatment involving immunotherapy – the administration of a substance to which a person is allergic in order to give them long-term relief from the symptoms. Grazax stimulates the immune system and helps the body build up its negative reaction to grass pollen. It can be a successful treatment, giving people a better quality of life. Grazax is used to build up immunity to allergy to grass pollen, presenting as hay fever (seasonal allergic rhinitis). Grazax is an allergen immunity treatment (AIT) that slowly builds up the body’s tolerance to grass pollen. It can be taken by adults and children over five years of age. This medicine is used long-term to increase its effectiveness.

Grazax is a tablet-based treatment involving immunotherapy – the administration of a substance to which a person is allergic in order to give them long-term relief from the symptoms. Grazax stimulates the immune system and helps the body build up its negative reaction to grass pollen. It can be a successful treatment, giving people a better quality of life.

This medication contains an extract of the grass pollen allergen called Timothy grass (phleum pratense), also known as cat’s tail, which is a common type of grass that creates pollen that many people are allergic to. It is a seasonal plant and the flowers pollinate in the summer. The pollen is airborne and it is difficult to know if you have inhaled it as it is so widespread. It is useful to check the pollen count before you go outdoors in the pollen season, so you know when to avoid the high pollen times.

Grazax is like a vaccine against an allergy to grass pollen in the form of a tablet. When you take this medication, the body absorbs it and stimulates the immune system to produce antibodies to fight the allergy. This is a convenient way of taking immunotherapy treatment as you take one tablet once a day, under the tongue. An alternative treatment is via a monthly injection, which may not be as easy for some people. This medicine has to be taken long-term for it to work. It is usually taken for a minimum of three years to build up immunity to grass pollen. Grazax can only be obtained on prescription from a doctor.

Grazax is used to build up immunity to allergy to grass pollen, presenting as hay fever (seasonal allergic rhinitis). Grazax is an allergen immunity treatment (AIT) that slowly builds up the body’s tolerance to grass pollen. It can be taken by adults and children over five years of age. This medicine is used long-term to increase its effectiveness.

Grazax immunotherapy is used to treat allergies to grass pollen in both adults and children over the age of five. It can only be used to treat grass pollen allergies and is not suitable to treat other common allergies (such as to pet dander, house dust or household chemicals). Different medications should be prescribed for these allergies.

There are also other forms of allergic rhinitis, caused by different allergies. Grazax immunotherapy is specifically for an allergy to grass pollen. The most common grass pollen allergy is to Timothy grass. Grazax contains Timothy grass to counteract the allergy.

Symptoms of hay fever are:

If you have hay fever you should:

This can make life difficult for some people, particularly as grass pollen is usually produced during the summer months when we want to spend time outdoors. Also, feeling as if you have a constant cold and are unwell is not pleasant and can affect your work, studies and home life. The main way to diagnose hay fever is with a skin prick test. This is a fast and painless test that exposes the skin to various substances that cause allergies. It then shows if a person is allergic to any of these substances, including grass pollen.

How do you use Grazax?

Put one Grazax immunotherapy tablet under your tongue for one-to-two minutes until it dissolves. You should not swallow during this time, to allow the medication to be absorbed.

Do not eat or drink for a minimum time of five minutes after taking a Graxaz immunotherapy tablet. This kind of medication is known as an oral lyophilizate. It is placed under the tongue as the body absorbs it faster because it sends it straight into the bloodstream.

Grazax only contains a small dose of the grass pollen allergen and it will take a while for your body to build up immunity. For this reason, you should start to take this medication at least four months before the beginning of the grass pollen season. You should then take it for three years (on the recommendation of your doctor) if it helps alleviate your symptoms.

Treatment with Grazax immunotherapy is continuous, not just during the grass pollen season. If you forget to take a tablet, you can take it as soon as you remember on that day, but you should not take a double dose the next day – simply take one tablet as normal.

Do not give your Grazax immunotherapy tablets to anyone else with hay fever or allergies. This is not a temporary symptom reliever and should only be taken by the person it is prescribed to.

The usual dose is one Grazax immunotherapy tablet a day for at least three years. This medication is taken long-term to ensure it helps build up the body’s immunity to grass pollen. You should be reviewed every six months by your doctor if you take Grazax to check it is working correctly for you. If you still have severe hay fever during the hay fever season, you should see your doctor as this may mean the medicine is not right for you.

What are the side effects of Grazax?

As with all medicines, Grazax immunotherapy can have side effects although not everyone will get them. Different medications can affect people in different ways. When you first take Grazax, you may find you suffer from the symptoms of your allergy, such as sneezing, and swelling and itching in the mouth. These should subside after a few minutes or several hours.

The other possible side effects of Grazax immunotherapy tablets are:

If you experience a severe reaction or difficulty breathing after taking this medication you should see a doctor immediately. Please read the package leaflet for a full list of the potential side effects that may occur when taking Grazax.

When should you not use Grazax?

Grazax may not be suitable for everyone. You should not use it if you:

If you have had a tooth removed or lost one, you may continue to take Grazax immunotherapy after a period of seven days, which will allow the cavity to heal. If you are allergic to fish, it is important to tell your doctor as Grazax contains the ingredient gelatine, which is a derivative of fish. Also, if you have had a reaction to grass pollen injections in the past, you should inform your doctor as this medication may not be suitable for you.

There are no studies that indicate that it is safe for people aged 65 or over to take Grazax immunotherapy, therefore this is not recommended unless your doctor advises differently. If you are planning to get pregnant, are already pregnant or are breastfeeding, it is not advisable to take Grazax and you should talk to your doctor. There is no interaction between Grazax immunotherapy and alcohol. This medication should not affect your ability to drive or operate machinery.

Does Grazax interact with other medications?

Where can you buy Grazax?

You can only get Grazax with a prescription from a doctor.

Can I get Grazax without a prescription?

No, Grazax immunotherapy is not an over-the-counter medicine – you must have a prescription from a doctor.