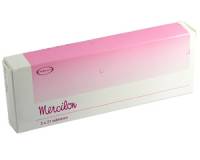 Mercilon tablets are a type of hormonal contraception commonly known as 'the pill' or combined oral contraceptive pill.

Mercilon tablets are a type of hormonal contraception commonly known as 'the pill' or combined oral contraceptive pill. Mercilon tablets contain two active ingredients, ethinylestradiol and desogestrel. These are synthetic versions of the naturally occurring female sex hormones, oestrogen and progesterone. Ethinylestradiol (previously spelt ethinyloestradiol in the UK) is a synthetic version of oestrogen and desogestrel is a 'third generation' synthetic form of progesterone.

Combined oral contraceptives like Mercilon work by over-riding the normal menstrual cycle. In a woman's usual menstrual cycle, levels of the sex hormones change throughout each month. The hormones cause an egg to be released from the ovaries (ovulation) and prepare the lining of the womb for a possible pregnancy. At the end of each cycle, if the egg has not been fertilised the levels of the hormones fall, causing the womb lining to be shed as a monthly period. The daily dose of hormones in the pill work mainly by tricking your body into thinking that ovulation has already happened. This prevents an egg from ripening and being released from the ovaries each month. Mercilon is a monophasic pill. This means that each tablet has the same dose of hormones in it.