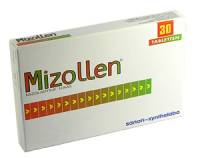 Mizollen 10 mg is a type of modified release tablet, which means that it is designed to release the dose of your medication into your system slowly over the course of several hours. This maintains steady levels of the medication throughout the day. Mizollen 10 mg is an antihistamine medication designed to counteract the natural allergic responses that the body has to certain substances. This medication contains mizolastine 10mg, which helps to change the body’s reaction to histamine.

Mizollen is a medication that helps to reduce symptoms that can occur when someone has an allergic response to a substance like dust, pollen, or dander. Mizollen is a type of non-sedating antihistamine, which means that large amounts of the drug don’t enter the brain, reducing your risk of feeling drowsy after you have taken a dose.

Mizollen works by preventing the actions of histamine, a substance that the body produces when reacting to a foreign substance like pet fur or pollen. The histamine in your body acts on histamine receptors, causing a reaction that leads to allergic symptoms.

In allergic responses like hay fever, histamine can cause inflammation in the airways and nose, resulting in watery eyes and a blocked or itchy nose. Mizollen blocks the histamine receptors in the body, so that you don’t respond as negatively to allergy substances.

Mizollen 10mg is a type of modified release tablet, which means that it is designed to release the dose of your medication into your system slowly over the course of several hours. This maintains steady levels of the medication throughout the day.

Mizollen is used when other forms of antihistamines, such as sedating histamines, aren’t suitable for the treatment of allergies. Most of the time, you can purchase Mizollen over the counter. However, if you believe that you have an allergy to something, it’s best to speak to a doctor about your condition or discuss your options with a medical consultant.

Mizollen helps to limit the symptoms that you will get when exposure to substances like pollen or house dust mites cause an allergic reaction in your body. Mizollen 10 mg can also be used for the treatment of a condition called Urticaria. This condition causes an itchy rash to develop on the skin, usually in response to an allergy.

Mizollen over the counter antihistamine is usually taken on a regular basis in advance of an activity that may expose you to an allergen.

How do you use Mizollen?

When taking a new medication, it’s important to read the instructions on the patient leaflet provided with your medication carefully. If you have any questions after reading this leaflet, speak to your pharmacist, consultant, or doctor.

Mizollen 10mg should be swallowed whole with water, unless your doctor advises otherwise. It is not recommended that you should crush or break the tablet, as this could damage the action of the modified-release ingredients. Mizollen 10mg tablets can be taken with or without food. If you find that your stomach is unsettled after Mizollen, taking the tablet with food could help.

You can take Mizollen on a regular basis to relieve the symptoms of your allergy for as long as you’re exposed to the allergen. You might take Mizollen every day, throughout pollen season, for instance. If you still experience symptoms after taking this medication, do not double the dose. Speak to a doctor or consultant about alternative options.

The dosage of Mizollen that you take will depend on a number of things, including the severity of your allergy and your response to treatment. Usually, the dose for an adult or adolescent over the age of 12 taking this medication will be one Mizollen 10mg tablet taken per day. Unlike other pills that can be taken when needed to relieve the symptoms of an allergy, your doctor will usually advise you to take your Mizollen pill every day at the same time to maintain a consistent dose of mizolastine 10mg in your blood stream.

You can take this Mizollen for an extended period of time without an increased risk of side effects. However, if you don’t see results, or you feel that your conditions are getting worse, speak to your doctor about getting an extra form of treatment.

What are the side effects of Mizollen?

All medications can sometimes cause side effects. It’s important to be aware of the possible side effects that Mizollen can cause before you begin taking it. Reading the patient leaflet will help you to determine when you need to seek help if you notice any adverse reactions to your medication. Mizollen is generally a very well-tolerated medication. Just because a side effect is stated here doesn’t mean that you will experience it.

Some of the most common side effects of Mizollen are:

If you experience any of the slightly less common symptoms of Mizollen, such as anxiety, depression, or low blood pressure, speak to a doctor immediately. You should also seek medical attention if you notice any changes in your heartbeat, or pains in your joints and muscles.

In some rare circumstances, Mizollen might cause a reduced number of white blood cells in your blood, which could lead to an increased risk of infection. It’s very unlikely that you will have an allergic response to this medication. However, seek medical attention immediately if you notice dizziness, swelling of the tongue, lips, or face, difficulty breathing, or skin reactions like hives and rashes.

This is not a full and complete list of potential side effects that might happen when taking Mizollen. Make sure that you check your patient leaflet when using this medication to ensure that you are aware of all possibilities.

When shouldn’t you use Mizollen?

Mizollen will not be the best treatment in all cases. It is important to answer any questions that your doctor or consultant asks about your condition before you begin taking this medication. Ensure that you do not take this medication if you know that you have any allergies to the active ingredients in Mizollen, or any other antihistamine medications.

Your doctor or consultant should also be aware of any other allergies that you have. Mizollen may contain inactive ingredients that also cause an allergic reaction. Because Mizollen doesn’t enter the brain in large portions, it is unlikely to make you feel drowsy or sleepy. However, you should avoid taking this medication with other drugs that might make you feel drowsy. If you do find that this medication causes you to feel as though you have less control over your senses, then make sure you don’t drive or perform any dangerous activities until you feel better.

If you are due to have any allergy tests, or you are taking any tests that could diagnose other responses in your skin, you should stop taking drugs like Mizollen, at least 48 hours before your test. The safety of Mizollen for use during pregnancy has not yet been established. Confirm with your doctor whether it is safer to use other forms of antihistamine, such as nasal sprays if you cannot tolerate your allergic response symptoms.

It is possible for the active ingredients in Mizollen (mizolastine 10mg) to pass into breast milk. If you are breastfeeding when taking this medication, it is important to make sure that it is safe for you to take this substance. The safety of Mizollen has not been fully established at this stage. Your doctor or consultant might recommend using a safer form of treatment when you are breastfeeding to reduce the risk of the drug passing to your child and causing side effects.

Some people may be more likely to experience side effects when taking Mizollen, such as elderly people, young children, or those taking other medications that interact with Mizollen. Speak to your doctor about your condition in depth before you begin this treatment.

Does Mizollen interact with other medications?

Medications like Mizollen can sometimes interact with the other drugs that you are taking on a regular basis. When this happens, you will have a higher chance of falling victim to more serious side effects. Drug interactions can also cause other issues, like preventing a medication from working properly, or making it harder to remove certain substances from your blood stream. It’s important to ensure that your doctor or consultant is aware of all medications you’re taking before you use Mizollen.

Mizollen should not be taken by anyone taking azole antifungals like ketoconazole, macrolide antibiotics, or certain depression drugs like citalopram. Do not take Mizollen with moxifloxacin, escitalopram, or Saquinavir.

Some medications can increase the blood level of the active ingredient in Mizollen, which increases your risk of side effects. These medications include HIV drugs like ritonavir, and cimetidine. Antihistamines may also interact negatively with histamine medications used for the treatment of leukemia.

Where can you buy Mizollen?

Mizollen is available to buy online or offline from reputable pharmacies and chemists.

Can I get Mizollen without a prescription?

You can buy Mizollen over the counter, without a prescription, but it is a good idea to talk to a consultant before you begin treatment with this medication to ensure that it is safe for you.