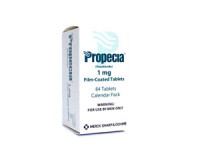 When is Propecia used?

The thinning of hair on the scalp is commonly experienced by men of all ages, but mostly as they enter their mid-life period, and is referred to as male pattern hair loss. It causes the familiar receding hairline and often balding on the top part of the head. Propecia is used to treat this often emotionally distressing condition, but it is not for use by children or women.

How to use Propecia

Propecia comes in tablet form and these are taken with a glass of water, usually as one tablet each day or as prescribed. Taking it at the same time each day is a good idea for helping to remember. The tablet is swallowed whole, without crushing or breaking, and can be ingested with or without food. Don't take more than the one tablet per day, and if you miss the time you can take it later, but in case of missing a day you should not attempt to 'make up for it' by taking a double dose the following day.

Propecia is taken as a 1mg tablet. Most men find that they need to take the drug for at least three months and possibly longer before they start to notice any changes in their scalp hair. It works over the long term, and if you suddenly stop taking it you will most likely lose the hair that you gained within a year of stopping.

Before taking Propecia you should inform your doctor if you have one or more of several medical conditions.
These include:

When taking Propecia it may be advisable to have regular blood tests, at least in the first few months, to check that no harmful side effects are occurring. Your prostate specific antigen (PSA) will most likely also be tested to check for any signs of prostate cancer. While taking the drug you should make regular visits to your doctor, especially if you experience some of the possible side effects.

As with a number of other drugs on the market which address male issues such as hair loss and Erectile Dysfunction, when taking Propecia an allergic reaction may be triggered, resulting in any of the following:

These last two could be indicators of male breast cancer, and if you spot these then you should refer them immediately to your doctor.

Less serious side effects of taking Propecia may include:

If you continue to experience reduced libido or other sexual side effects after you stop taking the drug you should see your doctor.

Propecia has no specific contraindication concerns to worry about, so it is safe to use alongside other existing medications. Compounds such as propanolol, warfarin, phenazone and glibenclamide have all been tested and no meaningful reactions with Propecia have been indicated.

Use during pregnancy, while driving or with alcohol

As Propecia is used to treat loss of scalp hair in males and is not recommended for use by women or children, pregnancy is not on the face of it an issue here. However, pregnant women may be worried if their partners are taking the drug and whether this may have any relevance for them and their unborn child. There is actually a high risk with this class of drugs of foetal damage if they are used during pregnancy.
As Finasteride has found to be present in semen this can clearly pose a risk to the foetus. Therefore, if intercourse takes place when the woman is pregnant and the man is taking Propecia a condom should be used. If you intend to have intercourse with any woman of childbearing potential you should wear a condom or stop taking the drug. Pregnant and potentially pregnant women should also not touch Propecia tablets that have been broken or crushed, as there is a danger of the active ingredients being absorbed into the body and affecting the foetus. As the tablets are originally packaged coated, there is normally no risk of this.

It is perfectly safe to drive when you are using Propecia, and there are no contraindications linked to the consumption of alcohol.