We’re launching our new website soon! But rest assured, we’ll continue providing you with the products and services that you have come to expect from Dokteronline.com.

Vitaros is currently out of stock. In the category Erectile Dysfunction you will find alternatives. 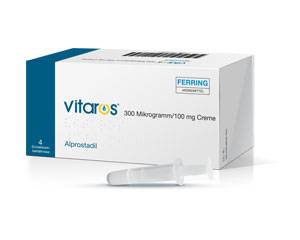 Vitaros is a cream that is used to treat Erectile Dysfunction in men over 18 years old. The active ingredient is called alprostadil. Alprostadil is a proven treatment for ED that has been used in various forms for over two decades. More information

Erectile Dysfunction is when you struggle to achieve or to keep an erection for sexual activity. It is probably more common than you think as it affects around 1 in 10 and most men experience it at some point in their life. ED can affect all men, no matter their sexual persuasion. ED can be caused by physical or psychological conditions and left untreated ED can lead to depression and other self-confidence issues or relationship problems.

Vitaros is a cream that is used to treat Erectile Dysfunction in men over 18 years old. The active ingredient is called alprostadil. Alprostadil is a proven treatment for ED that has been used in various forms for over two decades. This ingredient is combined with DDAIP to create a cream that is easy to apply and is easily absorbed.

When is Vitaros used?

Vitaros is used to treat mild to severe Erectile Dysfunction. It starts to work within 5 to 30 minutes after application so you don’t need a lot of prior planning. Vitaros can be an effective ED treatment if you have other underlying conditions such as diabetes or heart disease.

Vitaros does not interact with food or alcohol so you don’t need to work out exactly what you’ll be doing at any particular time and can just concentrate on enjoying yourself.

As Vitaros is a cream is it also a good option for men who would rather avoid taking pills or having injections. The fact that this treatment is locally applied can also mean that some side effects of the active ingredient alprostadil are minimised as you are only applying it to one single area of your body rather than absorbing it throught your whole system.

How do you use Vitaros?

When it comes to taking medication, you should always follow the instructions given to you by your doctor. It is important you apply Vitaros properly. If you are unsure how to do this please talk to a healthcare professional.

Vitaros comes in a special AccuDose pipette and should be applied around 30 minutes before intercourse. The effect will last 1-2 hours, this varies from person to person. You may wish to practice applying Vitaros on your own at first so that you are not under pressure and can get take the time to get it right.

We recommend you go to the toilet before starting to apply the cream as if you urinate shortly after application, some of the cream may be washed away and the effect will be lessened.

Once you have completed application you can engage in foreplay which may help with your arousal and erection. It will take up to thirty minutes for Vitaros to have a full effect. This effect will last for 1-2 hours but this does vary from person to person.

Vitaros comes in two different doses. 200 or 300 mcg of alprostadil per 100g of cream. Vitaros should be used as needed to achieve an erection. Your doctor will prescribe the starting dose for you. Do not alter the dose on your own. Vitaros comes in AccuDose pipettes, each one containing one dose for one erection.

What are the side effects of Vitaros?

As with all medications, Vitaros comes with some possible side effects, not everyone who uses Vitaros will experience all or any of these side effects.

If you get an erection that lasts longer than 4 hours, contact your doctor as you may need to reduce the dose or stop using Vitaros.

Common side effects that may affect more than 1 in 10 people are:

Itching may be due to the drug or to penetration, penetration can be easier if you use a water-based lubricant.

Uncommon, serious side effects that may affect up to 1 in 100 people:

You should always seek professional advice if you are experiencing side effects, even those not listed here.

When shouldn’t you use Vitaros?

You should not use Vitaros if:

You should talk to your doctor before using Vitaros if you have a history of any of the following.

You should use a condom when using Vitaros in the following situations:

Pregnant women should not come in to contact with Vitaros as the effects are unknown. The same goes for women who are breastfeeding.

The effect of Vitaros on a man’s fertility is unknown.

As Vitaros may make you feel dizzy you should avoid driving or operating heavy machinery whilst using Vitaros.

Does Vitaros interact with other medications?

If you are already taking other medication for ED, then you should avoid using Vitaros as it has not been studied for use in combination with these drugs. It could cause dizziness, fainting or prolonged erections.

Vitaros has not been tested for use with penile implants or smooth muscle relaxants like papaverine, nor has it been tested with drugs used to induce erections. Taking Vitaros with these treatments could cause painful, prolonged abnormal erection.

Vitaros may be less effective when used alongside treatments for high blood pressure, decongestants and appetite suppressants, although this has not been tested.

Do not use Vitaros alongside treatment to prevent blood clots as there is an increased risk for bleeding or blood in your urine.

Avoid using Vitaros with medication for high blood pressure as it may increase the likelihood of feeling dizzy or fainting, especially in the elderly.

Where can you buy Vitaros?

You can buy Vitaros from any pharmacy, order online for discretion and easy delivery, visit your local pharmacist or shop wherever is convenient for you.

Can I get Vitaros without a prescription?

Vitaros is a prescription-only treatment. You will need to consult a doctor and to discuss the treatment to obtain a prescription before you can purchase it. You can arrange an online consultation or visit your local GP.