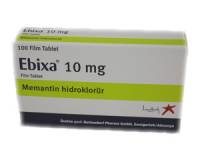 Ebixa comes in tablet form and treats the symptoms associated with Alzheimer's disease, particularly loss of memory, the capacity to carry out normal daily tasks and clarity in speech and behaviour.  Ebixa is not a cure for Alzheimer's, as unfortunately there is currently no cure, however, it can help manage the symptoms of this common disease and so benefit sufferers.  Ebixa is the brand name for memantine hydrochloride, a medicine that blocks the effects of an excessive amount of a chemical that occurs naturally in the brain called glutamate. It is part of a group of medicines known as NMDA receptor antagonists, which can help control memory function.   Ebixa is approved by NICE, the National Institute for Health and Care Excellence.

Ebixa is a prescription medicine that can help manage the symptoms of Alzeimer’s, one of the conditions associated with dementia. It can help to treat the behavioural and psychological symptoms of moderate to severe Alzeimer’s, a common disease that causes memory loss and other neurological disorders.

Ebixa comes in tablet form and treats the symptoms associated with Alzheimer’s disease, particularly loss of memory, the capacity to carry out normal daily tasks and clarity in speech and behaviour.

Ebixa is not a cure for Alzheimer’s, as unfortunately there is currently no cure, however, it can help manage the symptoms of this common disease and so benefit sufferers.

Ebixa is the brand name for memantine hydrochloride, a medicine that blocks the effects of an excessive amount of a chemical that occurs naturally in the brain called glutamate. It is part of a group of medicines known as NMDA receptor antagonists, which can help control memory function.

Ebixa is approved by NICE, the National Institute for Health and Care Excellence.

When is Ebixa used?

Ebixa is used when a person has been diagnosed with severe to moderate Alzheimer’s disease and a doctor considers it could help treat the symptoms of this disease and therefore give the person a better quality of life. Its effectiveness will depend on the individual’s stage of the disease.

Dementia is usually a slow-progressing disease that can take up to 10 years to fully develop, from the first symptoms such as mild confusion and forgetting things to the last stages when a person cannot look after themselves any longer. The most common forms of dementia are:

Alzheimer’s disease is a form of dementia, which is a condition that affects how the brain works (cognitive performance). It is believed to occur due to a combination of genetic, lifestyle and environmental circumstances. It typically follows three stages:

Vascular dementia is caused by small blood clots preventing oxygen from reaching the brain. This is sometimes referred to as a TIA (Transient Ischaemic Attack) or a mini-stroke. It should be noted that Ebixa is not recommended for vascular dementia – the above is for information on the different forms of dementia only.

Dementia usually occurs in people over the age of 65, as it is an age-related condition, although it can sometimes affect younger people. According to Dementia UK, more than 850,000 people in the UK have dementia, in various stages, and this number is expected to rise to over one million by 2021.

Ebixa unfortunately is not helpful in vascular dementia.

Taking a medicine such as Ebixa to help with the symptoms of dementia can benefit both the patient and the people around them, whether family or in a more advanced stage of the disease, people who are caring for them.

Ebixa blocks the effects of the chemical glutamate that is a neurotransmitter. This sends signals to the nerve cells in the brain to create and retrieve memories.  Glutamate helps the neurons (nerve cells) to communicate with each other and allow the memory part of the brain to function correctly.

However, sometimes there is an excess of glutamate which can kill the nerve cells. This is a cause of Alzheimer’s disease.  Ebixa can help prevent excess glutamate forming and causing damage. It cannot cure the symptoms that cause memory loss, but it can help slow them down.

Glutamate is also found in foods that contain protein, such as fish and eggs, and in certain fruit and vegetables, such as bananas, avocadoes and tomatoes.

Ebixa may also be prescribed by a doctor to take with other medications to help the concentration and memory problems associated with Alzheimer’s disease, which are known as cholinesterase inhibitors. These prevent the breakdown of another substance in the brain that is known as acetylcholine, which facilitates how the memory works.

If dementia is suspected it is important to get an early diagnosis as there could be an underlying condition that might be causing the symptoms. There is a difference between forgetting things as we get older and the symptoms that might be behind a form of dementia. Some of the warning signs that a person may be developing dementia include:

How do you use Ebixa?

The patient should not take more than the dose prescribed by their doctor. This is likely to be gradually increased to a suitable dose so the body gets used to the  medication and there is a lesser chance of suffering from side effects. It is possible to be prescribed a starter pack, which supplies the Ebixa tablets in different doses.

The Ebixa tablet should be taken at the same time every day with a glass of water. It should be swallowed whole and not chewed.

The usual dosage is to take one 20 mg tablet once a day. This is achieved by gradually building up the dose.

Below is a common dosage plan for starting to take Ebixa:

It is important to take the dose prescribed by a doctor.

What are the side effects of Ebixa?

As with all medicines, there is the possibility of side effects when taking Ebixa. These may include:

If the patient suffers from these or other side effects a doctor should be consulted.

When shouldn’t you use Ebixa?

A person should not use Ebixa if they:

It is particularly important to inform a doctor before taking Ebixa if the patient;

A doctor should decide in these situations if the benefit of taking Ebixa outweighs the risks of taking it when suffering from the above conditions.

Does Ebixa interact with other medications?

It is important to tell a doctor if the patient is taking any other medications as Ebixa may interact with them. This includes herbal medicines.

The doctor should also be informed of any pre-existing medical conditions the patient has.

Where can you buy Ebixa?

Ebixa can only be prescribed by a doctor. It cannot be bought over the counter at a pharmacy.

Can I get Ebixa without a prescription?

No, you cannot get Ebixa without a prescription.