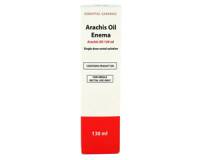 What is Arachis Oil Enema?

When is it used?

Arachis Oil Enema is prescribed to treat severe constipation, a condition in which the stool becomes hard and compressed, causing a blockage of the bowel. Constipation can occur when the urge to have a bowel movement is ignored, due to lack of exercise or during pregnancy. Illness, lack of hydration and a low-fibre diet are other factors that may cause constipation. Because Arachis Oil Enema is administered topically, the body is not burdened with pharmaceutical agents.

How to use Arachis Oil Enema

Arachis Oil Enema is inserted into the rectum. Warm up the enema before use by placing the unopened tube in warm water. This helps warm the oil to body temperature, which will make it more comfortable when you insert it. Administer the enema by following the directions for use on the package. For most people, the easiest position for taking the enema is while lying down. You will notice a sense of urgency when the enema takes effect. How long it takes for the enema to work depends on the degree of constipation and may vary per person.

Arachis Oil Enema comes in 130-ml, single-dose packs. This means each package contains one dose. The amount of enemas to be taken and the duration of the treatment should be determined by your doctor.

Note: Arachis Oil Enema contains peanut oil. Do not use this medicine if you have a peanut allergy. Arachis Oil Enema should not be used by patients who have a blockage in the gut or a form of inflammatory bowel disease, such as Crohn's disease or ulcerative colitis. See package leaflet for a complete list of possible contraindications, warnings and other side effects.