Changes in our services. Important information on the impact of coronavirus. 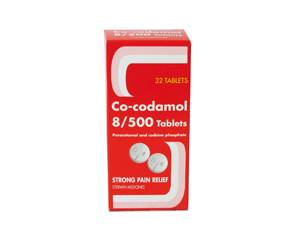 Co-codamol is an analgesic (painkiller) that is available in several different strengths and is taken for mild to moderate acute pain when other painkillers have not been successful. More information

Co-codamol is a strong painkiller that is a mix of the active ingredients paracetamol and codeine. It is used to treat pain when single painkillers have not worked.

Co-codamol should only be used for a short period of time as it is possible to become addicted to codeine and/or experience withdrawal symptoms when stopping it.

Co-codamol is an analgesic (painkiller) that is available in several different strengths and is taken for mild to moderate acute pain when other painkillers have not been successful. It is a combination of both paracetamol and codeine (known as a compound painkiller). It comes in the form of tablets, capsules and effervescent tablets.

Paracetamol works to reduce fever as it affects an area of the brain that controls the temperature of the body. It also blocks pain signals to the brain. It reduces the production of prostaglandins, which the body makes naturally to heal injuries and tissue inflammation. Paracetamol does not heal the cause of the pain and does not work directly (locally) on the site of the pain.

Codeine copies the action of endorphins (natural painkillers in the body) that reduce and relieve pain. They do not heal the cause of the pain but lessen the feeling. Endorphins are chemicals the body produces when it is under stress or in pain and give a “high” feeling.

Codeine has a similar action to endorphins and is known as an opioid.

The body also starts to tolerate codeine if you take it long-term and it does not work so well, meaning you would need to take a stronger dose to deal with the pain.

Because of the serious consequences of taking this painkiller, it is not recommended to take it for more than 3 continuous days unless your doctor prescribes it for longer. This medicine should be taken in the lowest dose possible for the shortest period of time.

When is Co-Codamol used?

Co-codamol is used when other, milder painkillers, such as paracetamol, aspirin and ibuprofen have not worked. It should not be used long-term, for more than 3 consecutive days, unless your doctor advises differently. It is used for the treatment of:

Co-codamol is especially good for treating the symptoms of coughing associated with heavy colds and flu. It can help stop coughing to help with sleep or when uncontrollable coughing occurs.

How do you use Co-Codamol?

You should Co-codamol tablets and capsules with a glass of water. The effervescent tablets should be completely dissolved in water before drinking the whole amount.

Co-codamol can be taken before or after meals, however, it is better to take it after as you are less likely to feel sick if you are prone to this side effect.

If you are taking Co-codamol you should not take any other medicine that contains paracetamol or codeine. This is because there is the risk of an overdose. Too much paracetamol can cause liver and kidney damage and too much codeine can cause breathing problems and loss of consciousness.

Co-codamol usually takes up to an hour to start to work. It then works for approximately 5 hours. If the effects of taking Co-codamol wear off before 4 hours have passed you should not take another dose as this can be dangerous.

This medicine should not be taken by children under 12 years of age.

The recommended doses are below, however, it is important to follow your doctor’s or pharmacist’s advice:

If you forget to take a dose of Co-codamol you should not take another dose to make up for this, but wait until the next dose is due as taking too much can be dangerous.

If your pain is severe you should not increase the dose but see a doctor.

What are the side effects of Co-Codamol?

Co-codamol can cause headaches to get worse which is a condition known as medicine-induced headache. This is when you have a headache for at least 15 days a month. If this happens you should stop taking this medication immediately. The headaches are likely to get worse when you stop, but will then get better after about a week. You are then likely to suffer from headaches again so you should see your doctor about another form of treatment.

When shouldn’t you use Co-Codamol?

You should not use Co-codamol if you are allergic to any of its ingredients (see the package leaflet).

Children under 12 years of age should not use Co-codamol.

You should not take Co-codamol if you:

It is important to tell your doctor or pharmacist if you are taking any other medication before taking Co-codamol, including herbal medicines.

Alcohol can interact with and increase the risk of the side effects Co-codamol so you should reduce or stop your alcohol intake while taking this medicine.

If you feel dizzy or drowsy when you have taken Co-codamol you should not drive or operate machinery.

Does Co-Codamol interact with other medication?

It is important to tell your doctor if you are taking other medication, including:

You must not take Co-codamol if you are taking any other medicines containing paracetamol or codeine – check all the packaging and if you have any doubts talk to your doctor or pharmacist. Note that many cough and cold remedies you can buy over-the-counter contain these ingredients and should not be taken with Co-codamol.

Co-codamol can sometimes temporarily reduce fertility in men and women. Taking this medication for a long period of time can also affect the possibility of conceiving. If you are concerned about your fertility while taking Co-codamol you should talk to your doctor.

Where can you buy Co-Codamol?

Can I get Co-Codamol without a prescription?

Dr Wouter Mol studied medicine at the University of Groningen. From 2002 to 2003, he served as a resident in neurology, and from 2003 to 2005 he served his residency training in internal medicine and emergency medicine. Wouter Mol has been working as a GP since 2005.