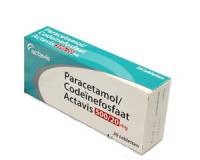 How does paracetamol/codeine treat pain?

The two different elements – paracetamol and codeine – block pain in different ways. Paracetamol appears to work by affecting chemical receptors that tell us that we are feeling pain, causing the brain to prevent pain signals from travelling to the rest of the body. Codeine is an opiate analgesic that provides pain relief by imitating endorphins, the body’s natural painkillers.

Always follow the directions provided with the medication or by your doctor. Do not take any other medications containing paracetamol when taking paracetamol/codeine. It is usually only prescribed for two to three days due to the risk of addiction. Paracetamol/codeine comes in the form of tablets or capsules. They should be swallowed whole, one at a time, with a glass of water. Soluble tablets are available for those who have difficulty swallowing tablets – these can be dissolved in water and then drunk.

The typical dose for adults is one to two capsules every four to six hours as required. Do not exceed the recommended dosage.

Paracetamol/codeine is not suitable for children under the age of 12 because of the severe risk of breathing problems. Children aged between 12–15 years can take it if other forms of pain relief are not working.

What are the side effects of paracetamol/codeine?

Liver damage (and rarely renal damage) is a consequence of overdosage with paracetamol.

When it is not advisable to take paracetamol/codeine?

Paracetamol/codeine is not generally recommended for women who are pregnant or breastfeeding as there are many other safer medications to try first. Codeine is not considered a safe medication to take during pregnancy.

Paracetamol/codeine may cause drowsiness, so caution is advised before driving or operating heavy machinery when taking the medication.

The effects of alcohol may also be enhanced.